All Posts by suze 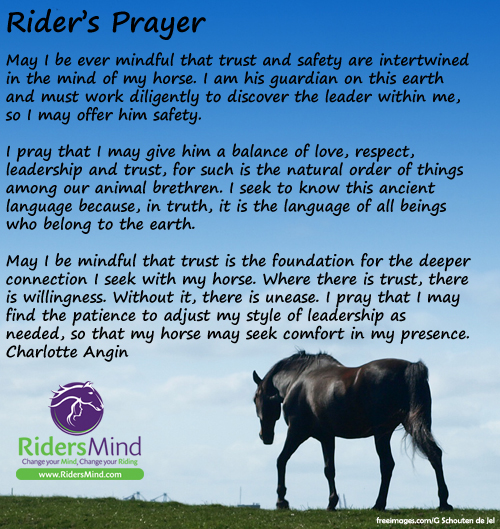 Say’s it all really x 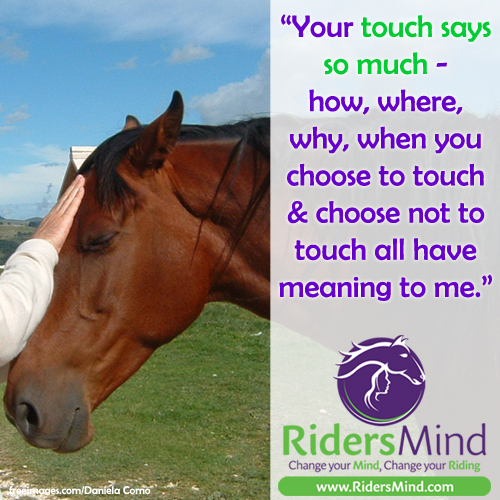 “Your touch say so much – how, where, why, when you choose to touch & choose not to touch all have meaning to me.”

Today I was really thinking about our ‘feel’ sense. As humans we reply heavily on verbal communication but in horse world this is emphasised. I even read some wild horses are afraid of horses neighing when they come into a domestic situation because noise gets the attention of predators. But touch communicates volumes in both the human and horse world.

Do you know how and where your horse likes most/least to be touched? Do you use touch to soothe and reward or demand and punish? How gentle can your touch become and still get a reaction? Do you withdraw touch to set a boundary and if so do your thoughts also withdraw from harmony to conflict?

Sometimes the most harmonious thing we can do is stand close without touching with the intention of exchanging loving energy with our horses – this wont touch their body but it will certainly touch their heart.
Please share if this touched you x 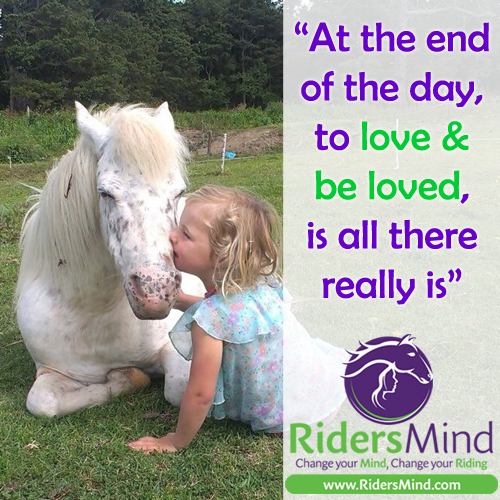 “At the end of the day to love & be loved is all there really is.”

Being with horses opens us up to laughter, tears (happy & sad ones), frustration, elation, bumps, bruises, broken bits and everything in between. Nothing remains untouched in our minds, bodies and souls. But after all is done for the day and our horses are resting in the moonlight – what really matters is the relationships we nurtured with them and with ourselves – the rest is just admin x 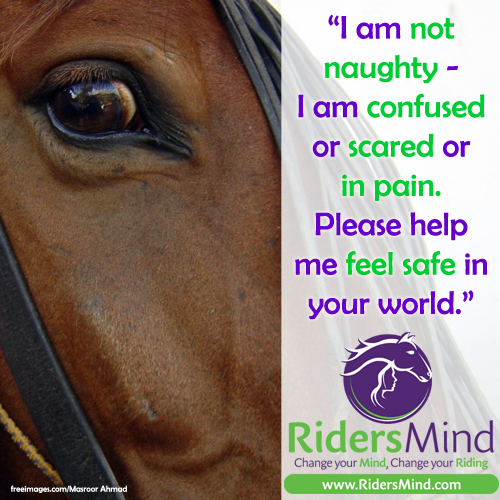 “I am not naughty – I am confused or scared or in pain. Please help me feel safe in your world.”

Today the theme is generosity of spirit. When our horses present challenging behaviour that scares or frustrates us we can be pretty quick to label them as flawed in some way. This is great shame because it blocks our wonderfully creative problem solving side from finding a solution and taking responsibility for our role in their behaviour. So next time you feel like labeling try understanding from the horses point of view instead – their priorities can be very different to ours as a nomadic, prey, non-territorial herd dweller.
Please share if you have some horse loving friends that might enjoy this reminder to be generous. 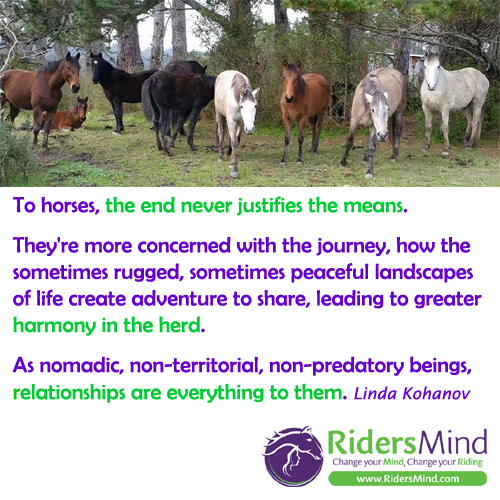 To horses, the end never justifies the means.

The horse’s world is not so very different from our world when we put our ego’s on hold and the competitive & judgement urges that go along with them. According to Brene Brown we are ‘hard wired for connection’ and I feel it’s up to us to ‘get out of our own way’ in building relationships with our horses – we become part of the herd as soon as we step into the paddock. 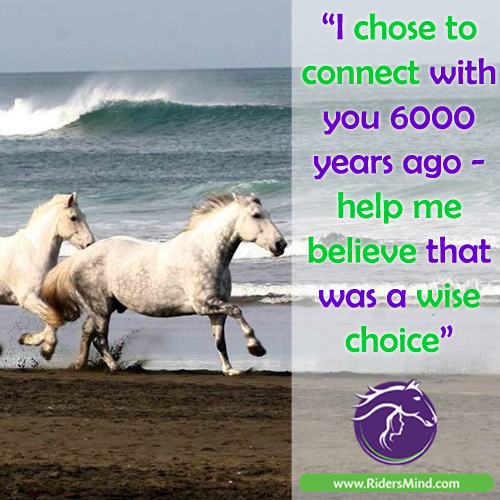 “I chose to connect with you 6000 years ago – help me believe that was a wise choice.”

Horses are naturally curious & seek connection. Even after repeated frightening or painful experiences most horses remain hopeful that they will be met with kindness & sensitivity. I invite you to honour their generosity of spirit because the truth is they could kill us in a hoof beat but they chose not to. 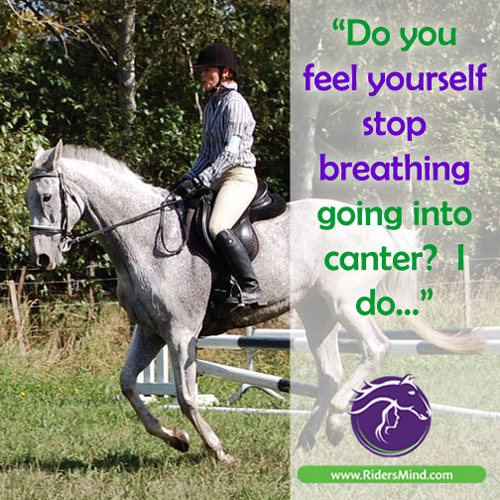 “Do you feel yourself stop breathing going into canter? I do …”

Smooth, deep inhales and long, complete exhales communicate safety to both you and your horses bodies. Without safety there is no learning x 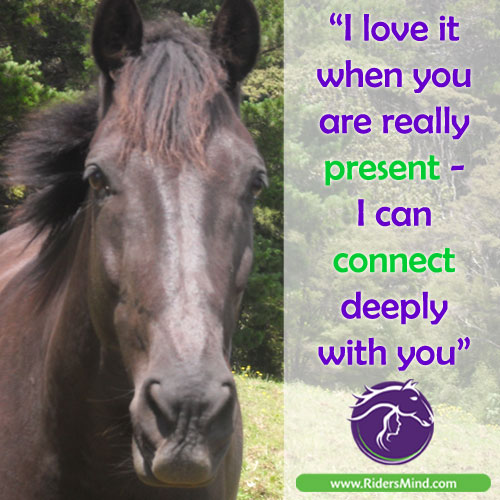 “I love it when you are really present – I can connect deeply with you.”

Calm, but suspicious, to catch so picked out feet in the paddock.  Front feet – no issue, debated what to do with lead rope when I picked out his back feet – decided safest place was around his neck – WRONG!  His paddock mate left and so did he…fine to re-catch and help rope to pick out back feed this time with now issue.  LEARNING – doesn’t ground tie and need contact with lead rope and all times.

In walk I can lead him and remind him to keep his head down thus lift his back.  I can see his gullet relax and swing and his splenius muscle pump up which indicates he is also using the muscles under the saddle (if he had one on which he doesn’t and won’t until I can tick all of the above in ‘current focus’ consistently) .I tried to lunge him at trot and one of three things happened

So I can take lunging off the list for now as he doesn’t have the confidence in himself  or lunge training to maintain a body posture that will help build his strength and symmetry.

I have a suspicion that his past horsemanship training is not helping him here as he is trained to disengage the hindquarters to stop and since straightness is part of my goals I need to work around this.  Luckily I know which method he has been trained in as I have learnt this too so I need to up my game to anticipate how he will react to certain cues.

So, today I spent a lot of time rubbing the bamboo gently all over his body until he did a big sigh (great sign of relaxation).  I then set a mini-goal of getting him to move straight in trot.

I got him moving around the edge of the arena in walk using the 2.4m bamboo as a moving fence between me and him (parallel with his body) to combat the following directly behind me impulse and the rushing.

When he was relaxed in walk and we has some straight space in front I did a few steps of trot with the hand holding the lunge rein positioned close to the loop on the nose of the serreta to keep his head and neck straight and not turn his head to me constantly – he is fine in walk so it’s just the extra energy of the trot that gets him looking to me for me support. Once he got the idea I was able to remove my hand from his nose and he trotted softly beside me for a few steps – yah!

I felt safer since he wasn’t stalking right behind me and I felt more able to regulate his pace and his head position. I am also going to get a lot fitter running beside him…

When I tell him what a clever boy he is he drops his heads so his forehead is level with my solar plexius and love a scratch and pat – positive feedback really is the elixir to learning. 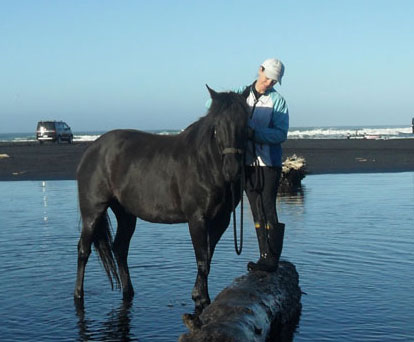 Have you ever had the feeling that you know someone even though you have only just met them?  That’s how I felt about Fly. As soon as I got close I could feel my heart energy calm, a quiet inner knowing of rightness and a gentle smile appeared (clumsy words but the best I can come up with at the moment).  It’s not dissimilar to when I met my husband…could both of them been instant love?

I met some gorgeous people when I trained as an Animal Communicator and one of those was Jilly Blythe from Opotiki.  We read each others posts on facebook and touch base when it feels right and Wednesday was one of the those times. I mentioned that I had a new teacher in the form of lovely Fly and Jilly was immediately presented with a really interesting back story to our connection.  It seems that each Communicator tends to be shown a particular type of information more often that other types – for me it is the emotional side of things – what the horse would like it’s owner to realise for the owners well-being and growth.  Well today Jilly was getting past life stuff loud and clear and this is what she said:

You are resolving karma together from the Crimean War when he died and you went on to survive but where very badly injured … bit hazy but thats what I am getting. There was a lot of fear, you were a young male and you and your horses hated being there because you were both gentle souls and had come from a rural situation where he was your farm horses, companion and love of your life…not sure why the s keeps attaching itself to horse! Maybe you had a few or went on to have more.

You hated war even more after you lost your horse blaming men, hatred, anger and authority for his death ….So you choose a life of solitude after that…

You were very respected for your connection with horses and that was a gift that came from the horse you lost because of your open heart and connection to his. He has to learn to trust again and he knows you are the one to build that trust again… he knows his death wasn’t your fault… he actually gave his life to save you, he protected you as a shield.

There was a lot of noise when he died, it was at a point when things got really hectic. There was a to of jealousy towards you too because you were young brave and courageous and so was your horse. He was very smart. You have a huge connection and trust thing happening.

You knock around together in the non physical as well so now he is going to be your mentor and will prove to you that you are all and more than you are allowing yourself to be….I think loosing your other horse put you into alignment with the energy of this new horse so you could complete this part of your journey together right now …..

A lot of this rings true with the lessons I am learning in this life.  I am not really into past lives in a big way as I think you can get caught up in ‘forensic’ investigation of the origins of things when your energy is better spent dealing with the present with as much love and openness to learning as you can.  We also run the risk of ‘righteous victimhood’ and giving our power way to a story – in a ‘that is way I am the way I am’ kind of way. What Jilly told me certainly gives me pause for thought and an increased sensitivity to how Fly might react in certain situations.
Have you ever wondered if you have known a person or horse a little ‘too well’ instantly?
« Previous 1 … 3 4 5