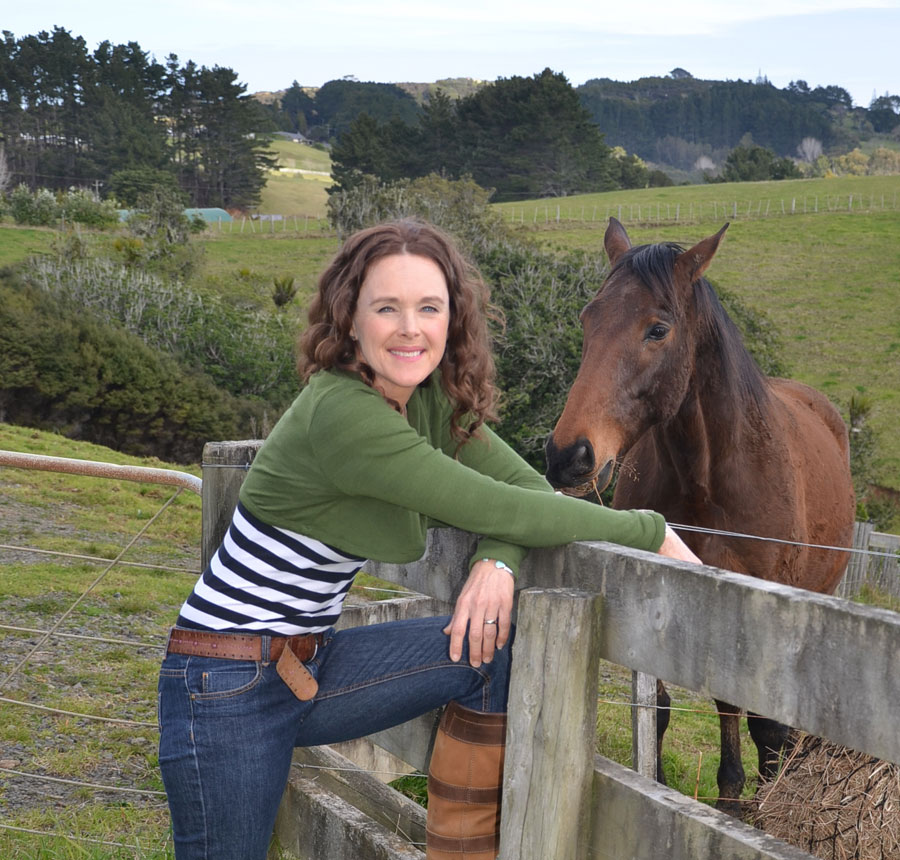 Hi there animal lover. Aren't we so lucky to share our lives with fascinating, beautiful and magical animals! Being with them is a joy...and confusing and frustrating and sometimes heartbreaking...

I'm Suze Kenington and have shared my whole life with all sorts of animals and my awareness of how perceptive and sensitive they are keeps on expanding thanks to animal communication. Mind blowing, heart opening - how could I not have seen this before I asked myself - doh!! Well for one thing I am human and modern day human-ness isn't focused on expanding awareness...

The ripples of this expansion continue to change the relationship I have with my own animals and I would like to invite you to take a peak inside your animals world - it's an amazing place full of potentially enriching connection for both of you.

You love your animals & they love you back...

Love is a little word that has a big impact on our actions. If I can help you experience more of this good stuff by connecting you with an animal in your heart then woo hoo!
(More love for ourselves, others and the earth is often a pretty funky ripple effect of animal communication...just saying)

"I thought that was the case, but didn't trust myself and wanted a second opinion"

I hear this a lot - our animals are communicating with us constantly.  I'm an 'interpreter' not the creator of the messages

My Joyride from Ribbons to Relationship 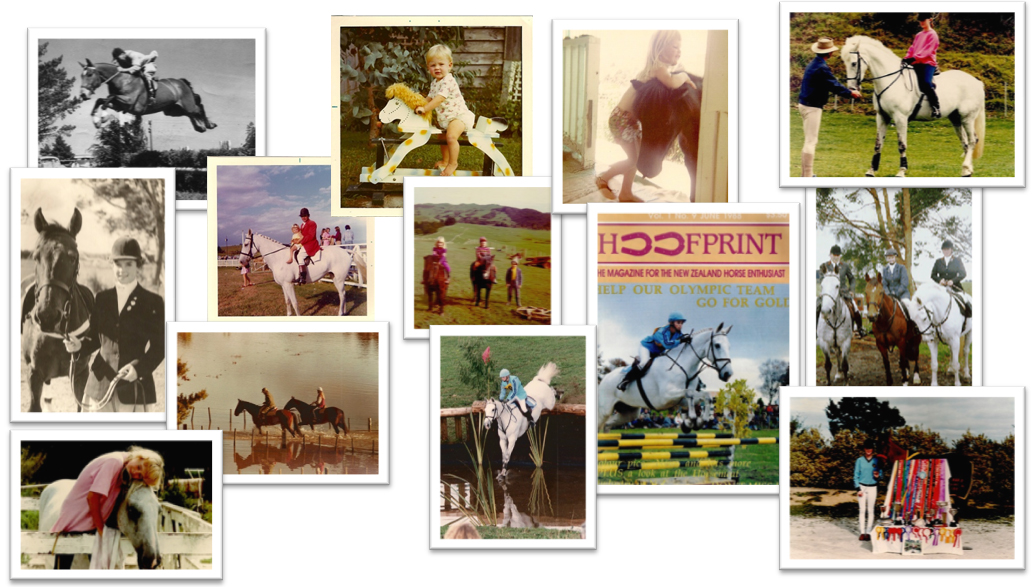 I was very lucky to be raised on a farm in Northland, New Zealand by two horsey parents. Even my grandmother was a rebel in her time riding astride when it just wasn't the done thing for women!

As a kid I learned to ride on a sheep skin on Sambo the Shetland. As I got older I drove Dad crazy jumping every log, drain and thistle patch when I should have been shifting cattle... Surrounded by horses, dogs, cats, sheep, cattle and native birds was my happy place.

In my teens I did pony club, hunting, eventing, showjumping and dressage...a fabulous horsey childhood! I was competing at national championship level in the heyday of NZ eventing so was lucky enough to have access to amazing coaches like Blythe Tait (he was our pony club champs coach - awesome!!), Jack le Goff (trainer of the US eventing team), Captain Mark Phillips...

Then I grew up, went the university, worked and live in London for 9 years. I have lovely horsey memories of riding in Ireland and chatting with a member of the Queens Cavalry whilst watching him train one of the ceremonial black horses in Hyde Park... The London years meant stepping back from riding but I always had my heart set on coming home to NZ and having horses and dogs in my life again.

I learnt to dive and travelled through Africa, the Middle East & South America - meeting wonderful land and marine animals along the way. I was really drawn to sharks and was privileged to see large groups of hammerheads off the cost in Costa Rica. 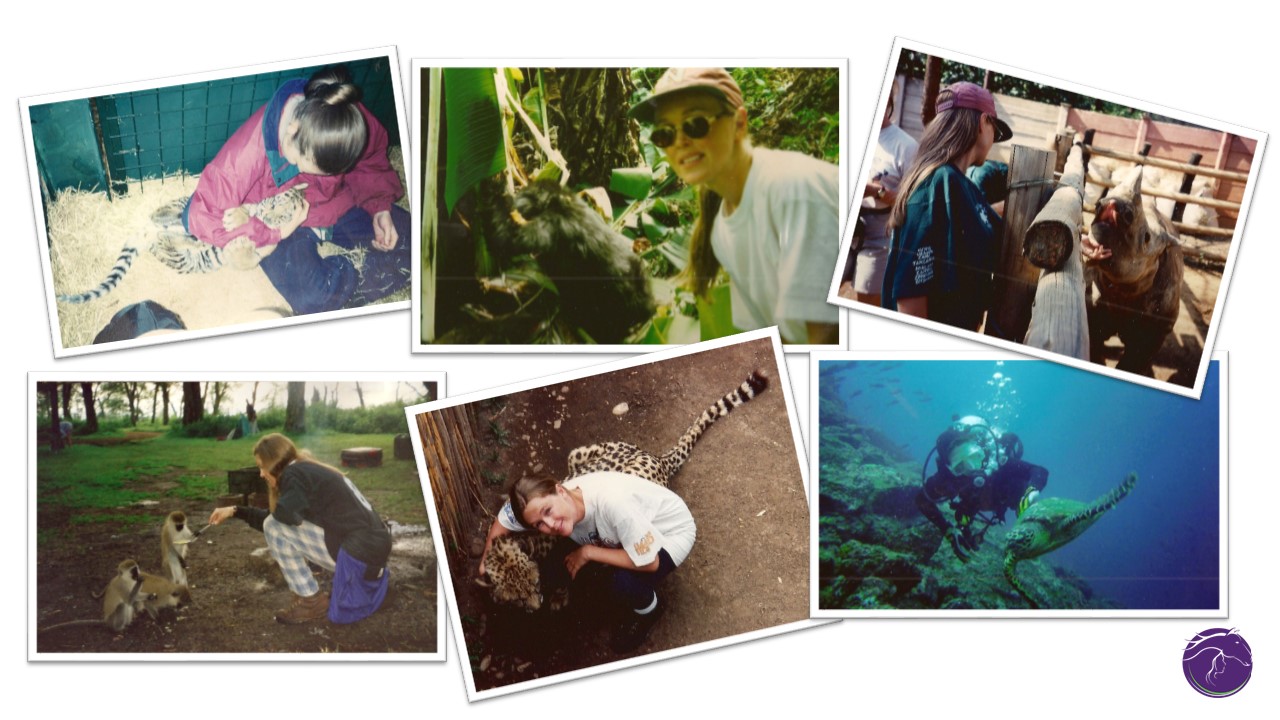 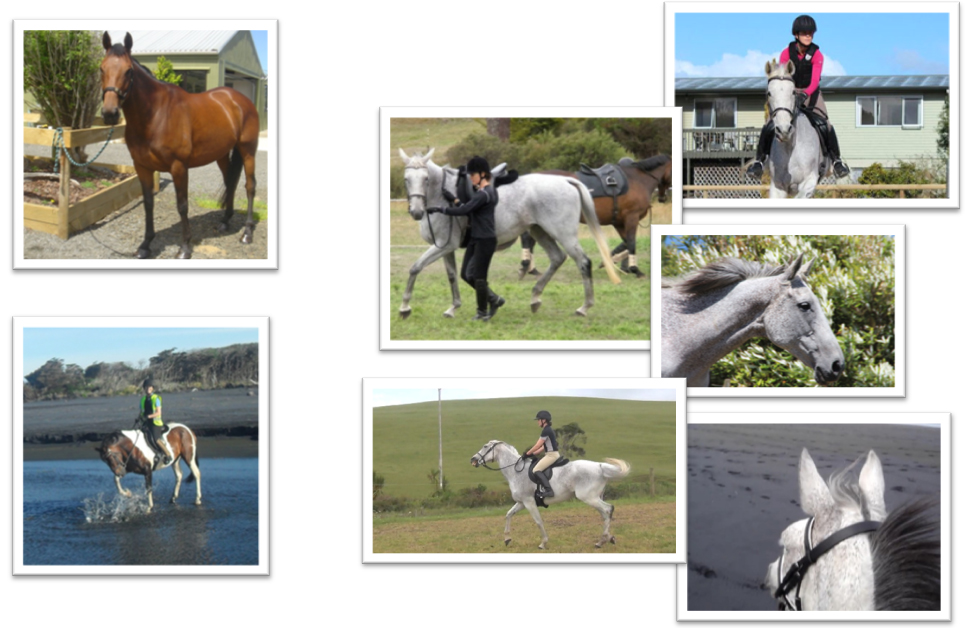 Returning to riding - but things had changed

When I did return to riding I also became a mum - not surprisingly my body and my bravery had changed dramatically from my teens...some changes were good (I was certainly less driven by my ego), some changes not so helpful (I sure didn't have the strength and stability in the saddle I used to - how frustrating!).

As the saying goes 'when the student is ready the teacher appears' - and so it was with the horses that came into my life. The little bay thoroughbred took it upon himself to give me a couple of black eyes and a split lip worryingly close to our wedding day (cue husband saying 'that's not going to look very nice in our photos hon...').

As you can see Dooie, the grey thoroughbred, expressed her frustration with my riding in no uncertain terms - she had high standard and expected me to meet them - fair enough since it's a privilege, not a right, to be on her back.

The paint fulla taught me about taking care of the horse's emotional world as well as their physical needs. Because of him and Dooie, I trained as an Animal Communicator. I really wanted to know what they needed to be happy 'straight from the horses mouth'.

As someone with a mainstream horsey upbringing this has certainly pushed some boundaries - boundaries that really need to be pushed. I am so grateful for the lessons in humility so I could better experience the sensitivity, intelligence, resilience and generosity of our animal friends. 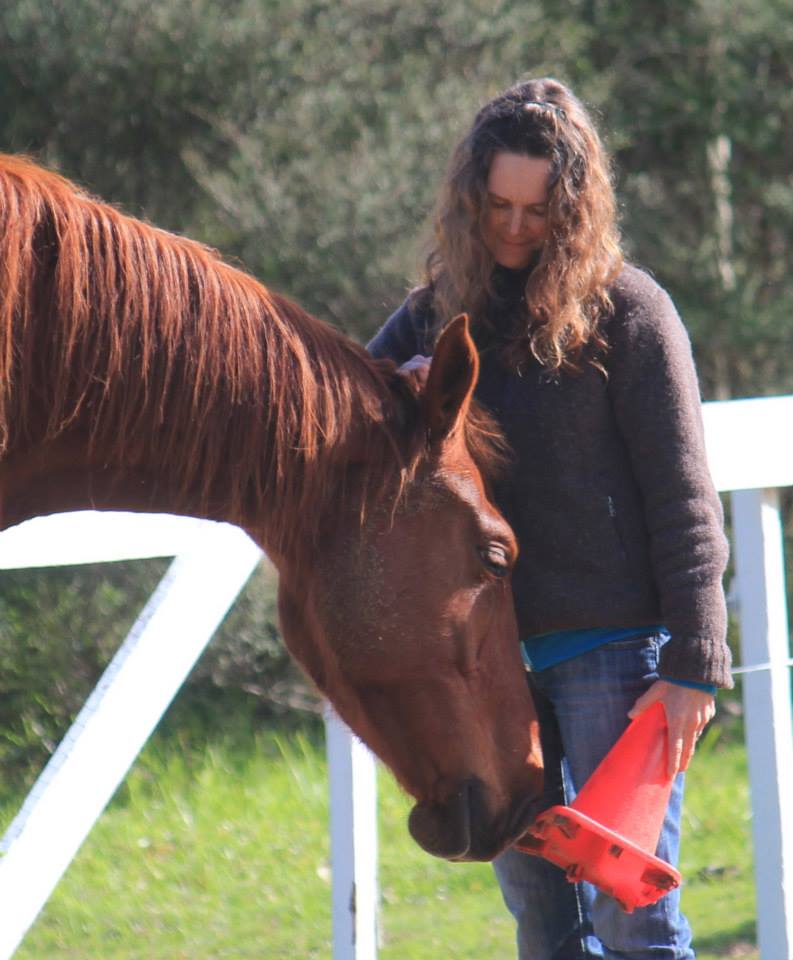 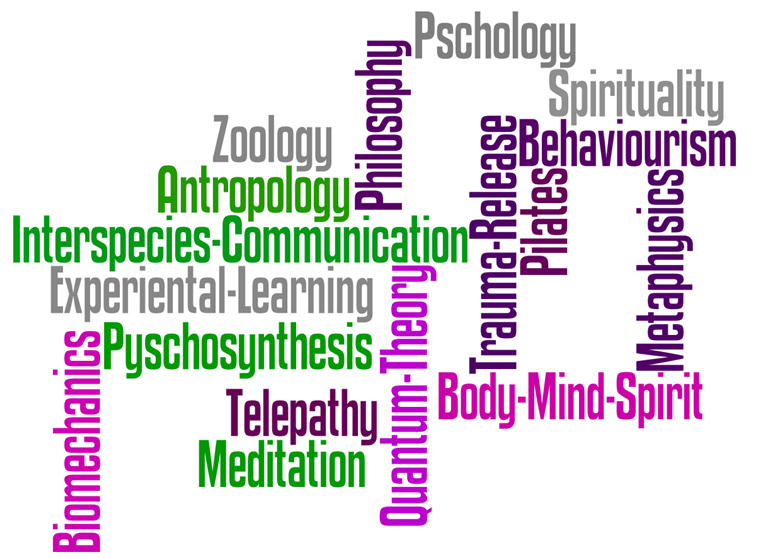 The 'kitchen sink' of learning

Animal Communication wasn't the only learning I pursued...I went the whole nine yards looking at body, mind and spirit. Riding wasn't what it was when I was a kid and my joyride from ribbons to relationship was in full swing.

I have an enduring fascination with the psychology of how we relate to ourselves, others (both human and animals!) and the world at large. In that learning journey I have trained in a number of approaches, often focused on untangling the web of stories we tell ourselves that keep us stuck.

Over the last 40 odd years with horses I given a lot of approaches a try. I have no hidden agenda to push regarding using a bit or not, stabling or not, feeding a certain supplement or not...your horse, your choice.

My agenda is very transparent - I want to give you the tools to enhance your mutual joy. When you and the animals in your heart connect deeply it enriches both your lives. They want to show you their most whole self. 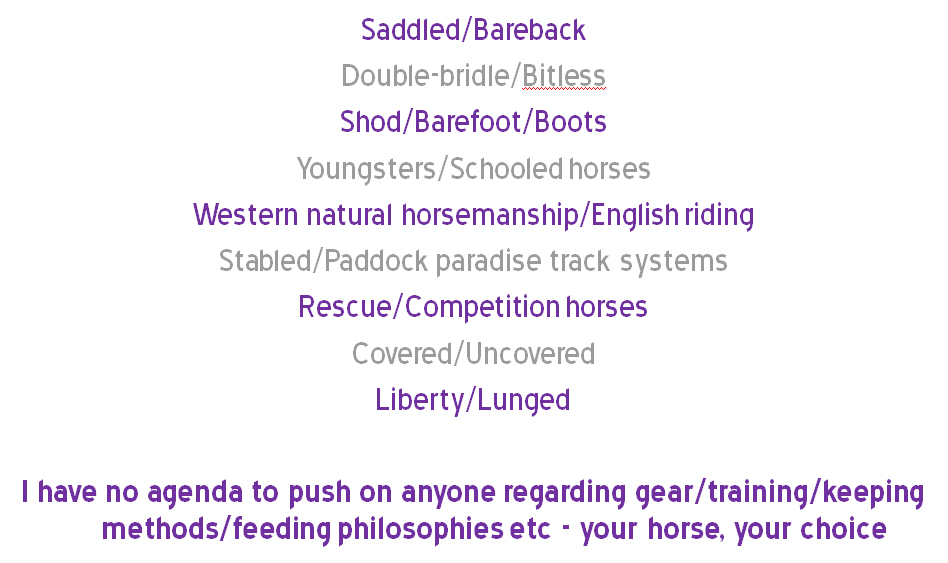 Expected to see RidersMind?
Click on the logo to learn why it's changed

As an 'interpreter' between you & the animal in your heart, it's a treasure hunt to discover what they share that enriches both your lives

Subscribe to insight & inspiration emails from our beloved animals

Your contact details will never be shared and you can unsubscribe anytime.

Changing the name has been knocking in my brain and heart for a while. RidersMind was originally home to mindset and connection coaching for horse riders and as my energies focused on animal communication I thought it was easier to leave the name the same...until now. It's began to feel a bit like an old coat that doesn't quite fit quite right, pulling a bit here and there, so it's time to evolve.

Horses still have a huge place in my heart and make up the majority of my communication conversations, but I seem to be chatting with more and more dogs and cats and the odd lizard, parrot, goat...

So if you want to connect with an animal in your heart - whether they still walk the earth beside you or not, it would be my privilege to be a bridge from your heart to their.
Suze xx